We’ll Regulate Netflix, Other Streaming Services, They May Cause Chaos – Lai Mohammed

The minister of Information Lai Mohammed has shared that the federal government has plans to regulate Netflix and other streaming services because they can be used to “cause chaos” and undermine Nigeria’s democratic processes.

At a two-day conference, the government and industry stakeholders discussed “the implication of Nigeria censorship laws and regulatory framework for Over-The-Top (OTT) streaming services and content providers in Nigeria.” Speaking, the Minister of Information and Culture, Lai Mohammed, said the popularity and demand of streaming services in Nigeria increased with the COVID-19 pandemic, “hence its regulation.”

The minister was represented by the Director, Information, and Technology in the ministry, Comfort Ajiboye, reiterated that social media and streaming services can be used “to cause chaos and undermine democratic processes.” The conference was organized by the National Film and Video Censors Board (NFVCB) on Wednesday in Lagos, along with practitioners and stakeholders in the entertainment and creative industry.
Read also: #EndSARS: Lai Mohammed Should Apologise To Us – CNN Says

Controversial Nigerian crossdresser, James Brown has disclosed how he once aspired to become a politician in Nigeria.

In a live video on Instagram, the crossdresser opened up about his family and how he finally decided to join the crossdressing business.

According to James Brown, life has been a roller coaster for him as he had been dwindling from one choice of career to another.

He also disclosed that he once ‘fell in love with governor’ and badly wanted to become a politician.

Sadly, he was forced to give up on his dream of being a politician due to his feminine nature. According to James, you have to look manly in order to become a politician in Nigeria.

Watch the video below; 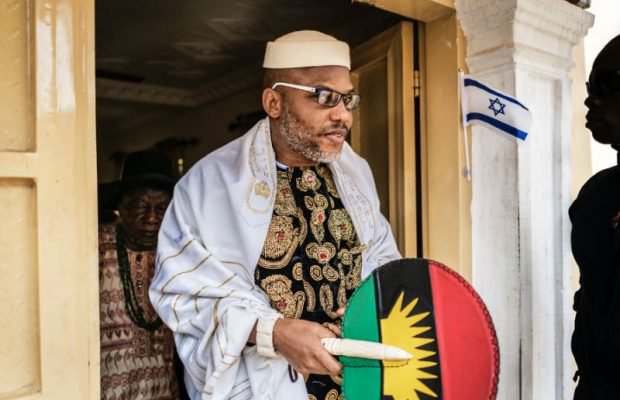 Justice Binta Nyako of the Federal High Court in Abuja has adjourned the trial of the detained leader of the Indigenous People of Biafra (IPOB), Nnamdi Kanu till January 18, 2022.

His lawyers approached the Abuja Division of the Federal High Court for an abridgment of time. Justice Binta Nyako informed Mr. Kanu’s lawyers that there was no earlier date than January 18 next year. Ifeanyi Ejiofor who led Mr. Kanu’s legal team, and Shuaibu Labaran appeared for the Attorney General of the Federation (AGF).

The IPOB leader was not in court today for his case. Justice Nyako ordered the Department of State Services to allow Kanu to practice his faith, change his clothes, and be given the maximum possible comfort in the detention facility.
Read also: Nnamdi Kanu Still Standing Trial, Idea Of Pardon Is Premature – Malami