BudgIT Foundation, a foremost civic-tech organisation, leading the advocacy for fiscal transparency and accountability in Nigeria and three other African countries, has called on the National Bureau of Statistics (NBS) to publish data on FAAC disbursements in Nigeria between March-August 2021 on the bureau’s official website. This is imperative as it enhances public oversight and provides CSOs and analysts with the opportunity to analyse revenue generation at the subnational level while holding respective representatives to the standards of fiscal responsibility.

Over the years, the timely release of public data by the NBS has been crucial to our advocacy within Nigeria’s civic-tech space. However, publications of specific public data on the NBS portal have not been consistent in the last few months; case in point – data on FAAC allocations and disbursements to state governments from March – August 2021.

Following this development, we wrote twice to the Office of the Statistician-General to request information on the delay; however, we have not received any official response from the bureau as of the time of this press statement, despite the acknowledgement of the letters we sent.

We want to reiterate that the timely publication of public data is instrumental to our engagement on fiscal resource governance and crucial to ensuring that an average Nigerian can access public data in a timely and simplified manner.

We, therefore, call on the NBS and the Office of the Statistician-General to respond to our letter by availing the public of the data on FAAC disbursements within the stipulated timeline. We also urge the citizens to not relent in demanding a government where the publication of public information is timely and accessible to everyone.

Kaduna State government has sacked 233 teachers who presented fake certification upon the time of their recruitment.

Addressing newsmen during a press conference in kaduna on Thursday, the Chairman of the State Universal Basic Education, Tijjani Abdullahi, noted the investigation was  conducted to ensure the certificates presented  by the teachers are genuine.

Abdullahi, said the step was taken to raise the standard of education in the state and also to confirm that the teachers have the requisite credentials that constitute the basic qualifications for employment as teachers.

“The Board will dismiss the 233 teachers who presented these fake certificates, while their files will be forwarded to the Ministry of Justice to initiate prosecution for forgery. The Board will continue to check the integrity of the certificates presented by teachers to ensure that this critical profession is not devalued by impostors.

“As part of our duty of transparency, the names of the 233 teachers found to have presented fake certificates will be uploaded on the website of the Kaduna State Government today,” he said.

The Board also announced that it will conduct a fresh competency test for 12,254 teachers from January 2022 as part of continuous assessment of its teachers both for their own improvement and for better delivery of learning.

This is coming in less than 24 hours when NewsBreak reported how ISWAP abducted five Borno state government officials.

In the news, gathered information revealed that the victims were abducted in Damboa Local Government Area.

According to Daily Trust, the victims had reportedly left Damboa town while heading for Adamawa.

“It is unfortunate that the insurgents continue their nefarious activities on the fringe of Sambisa forests, we have received reports that ISWAP kidnapped at least 15 persons (passengers) near Gumsuri village while allowing two others to go.

“They are desperate to recruit more people into their criminal activities. They deceived people because they dressed in military attire. It is sad and shocking,” a security source said.

The headquarters of a faction of the ruling All Progressives Congress (APC) has been set ablaze. This happened on Thursday morning.

The building located along Maiduguri road, in Kano metropolis, was set ablaze by thugs suspected to be against the Mallam Ibrahim Shekarau’s APC faction. 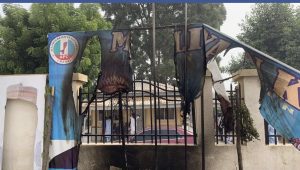 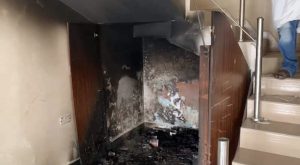 Justice Hamzat Muazu subsequently declared that the congress conducted by the faction led by former Governor Shekarau and lawmaker, Sha’aban Sharadaas, is the authentic exercise, effectively handing over the structure of the APC in Kano State to Shekarau and Sharadaas.

Recall that the Kano APC under the leadership of Ganduje had on July 31, 2021, returned all its candidates unopposed across the 44 local councils, unanimously electing the 13,068 ward executive members across the 484 wards.

Rejecting the option of consensus, a member representing Sharadaas, lamented that the process had excluded some party loyalists.

Sharadaas, Chairman, House Committee on Security and Intelligence, alleged that the party had denied members willing to contest in the ward congress opportunity to do so.

He subsequently teamed up with Shekarau to conduct a parallel congress and submitted its report to the APC leadership in Abuja.

Amid the controversy, the faction loyal to Sharadaas and Shekarau approached an FCT High Court to challenge the authenticity of Ganduje’s exercise – which they were successful on.