The Medical and Dental Practitioners Council of Nigeria has found a prima facie case of professional misconduct against three Premier Specialist Hospital doctors over the death of celebrity chef, Adepeju Ugboma.

The indictment was the outcome of an investigative panel set up by the Council to consider a petition by Mr Ijoma Ugboma, the husband of the deceased.

An investigative panel looked into a petition by Ijoma Ugboma, husband of the deceased, and reached a decision on October 28, 2021.

A letter to the widower, signed by MDCN Secretary, Dr E. D. Abudu, was made public on Wednesday, Nov. 10.

Peju died on April 25 at Evercare Hospital in Lekki where she was rushed to after she developed complications from surgery performed at the Premier Specialists Medical Centre in Victoria Island.

The 41-year-old was the founder of the pastry company I Luv Desserts.

The council announced that the doctors will face the Medical and Dental Practitioners Tribunal.

The inquest is ongoing at the Magistrate Court in Ogba, Lagos.

Find the letter below 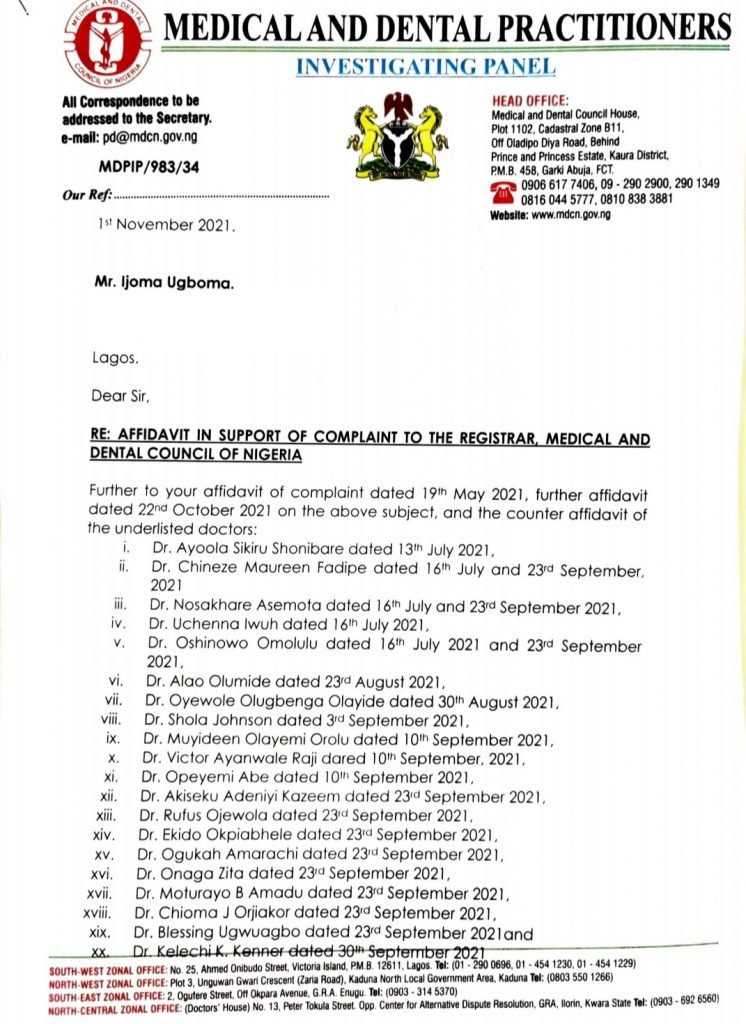 Manchester United have announced the appointment of Ralf Rangnick as interim boss until the end of the season.

The German, 63, leaves his role as head of sports and development at Lokomotiv Moscow to take the job at Old Trafford.

He arrives at the Theatre of Dreams with his struggling side sat eighth in the Premier League table, already 12 points behind leaders Chelsea after drawing 1-1 at Stamford Bridge on Sunday.

Rangnick is widely regarded as a pioneer of gegenpressing, and has influenced the likes of Thomas Tuchel, Jurgen Klopp and Julian Nagelsmann with his methods.

He has also helped to unearth stars of the future including Erling Haaland while working behind the scenes, as he also takes on a consultancy role at United.

Rangnick has held numerous managerial positions, but has largely opted to step back in recent years.

He could bring his famous 4-2-2-2 formation to Old Trafford, and is bound to turn his new side into a coherent pressing unit – something that has not been the case at United for some time.

Rangnick turned down Chelsea in January because he felt that he’s ‘no interim coach’.

But his stance appears to have changed when it comes to Man United.

Some fans have pondered where Cristiano Ronaldo will fit in to his new boss’ pressing style.

The Portuguese was dropped to the bench for Sunday’s clash with Chelsea by caretaker Michael Carrick – although Gary Neville reckons that Rangnick picked the team.

Luke Shaw, meanwhile, may face a battle to impress his new boss, after Rangnick claimed that he’s ‘not so sure’ if the England left-back is ‘on the same kind of level you need for a club like Man United.’

Liverpool legend Jamie Carragher is convinced that Rangnick is the man to get United back into the Champions League.

Beauty DIY: How To Get Rid Of Smelly Feet

Having smelly feet can be embarrassing and uncomfortable at the same time. Some people have grown to live with it, but there are several ways to get rid of it because smelly feet should not be a part of your worries.

It is usually caused by excessive sweating and bacterial growth on the skin. So here are some easy and quick ways on how to get rid of smelly feet;
Essential Oils
Essential oils have several health and beauty benefits. It has antimicrobial and antifungal properties that can eliminate the bacteria present on your skin. These oils will not only kill the bacteria but will also cover the stink. Put eight to ten drops of essential oil in half a bucket of warm water and soak your feet in it for about 30 minutes. You can use lavender oil or any other essential oil. Do this twice a day for a week.

READ ALSO:  Beauty DIY: How To Use Turmeric On Face For Glowing Skin
Vinegar
The fermented liquid is excellent when it comes to how to get rid of smelly feet. The acid in the vinegar neutralizes the odor that helps to kill the bacteria. Simply mix half-a-cup of apple cider vinegar in a bucket of warm water and soak your feet in it for 10 -15 minutes.

READ ALSO: Beauty DIY: How To Lighten Your Underarm
Antibiotic Ointment
Bacteria, not sweat, is what leads to foot odor. While sweat leads to bacteria due to moisture, there is little that can be done to stop your feet from sweating. You can add baby powder to your soaks to absorb moisture, or wear moisture-wicking socks. You can also add antibiotic ointment to your routine. Simply apply the ointment to your feet, between your toes, and also a small layer on your toenails before bed. Put your socks back on and the ointment will work to kill off the odor-causing bacteria that are making your feet smell.

Trending video of the day;

Y’all Look At Magic!!! That Wizkid’s Show Was A Madness – Simi

Popular songstress and songwriter Simi Ogundele-Kosoko is blown away and filled with pride as her music colleague and compatriot Ayo Wizkid Balogun’s show was an absolute success that she has termed as nothing short of magical.

Simi in her appreciation of Wizkid’s O2 Arena show’s success took to her page to call the attention of Nigerians to the magical experience and the level of success of the show. She wrote on her Insta-story, describing the show as magical, an absolute madness, she said

“Y’all look at the Magic our people are doing worldwide!!! That Wiz show was a madness”

KOKO TV recalls that the ticket to the Wizkid’s O2 Arena’s show sold out in under 30 minutes some 3 months back, that the singer was forced to have to organise another show by a day more, and the ticket for that show was also sold out within 13-minutes that it was put on sale.
READ ALSO: Don’t Throw Too Many Pity Parties – Sim Advises

Watch our trending video of the day below;