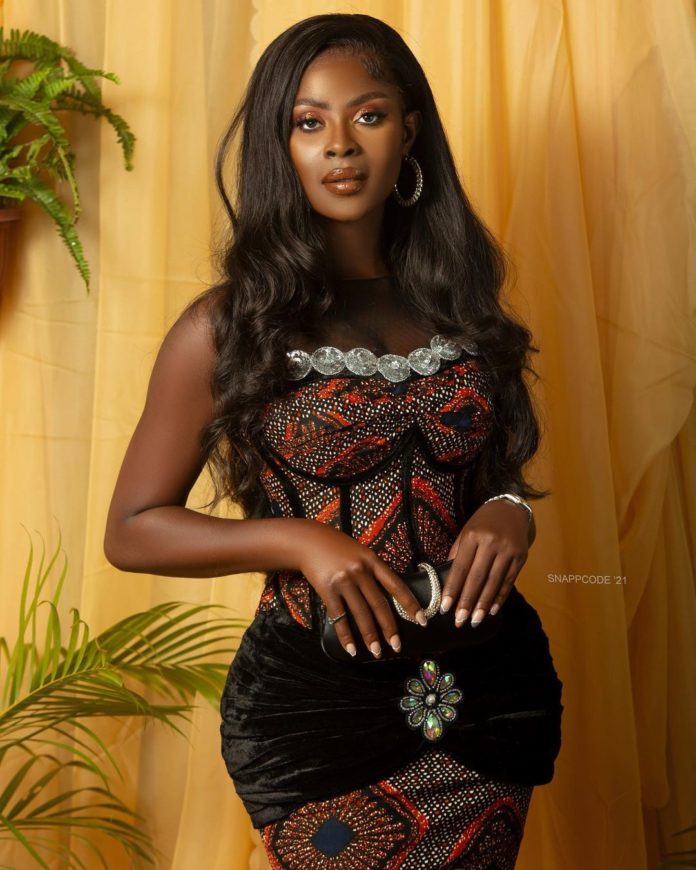 BBNaija star Khloe has cried out over the difficulty many encounter for being Nigerian and how difficult it is to access opportunities. The TV star took to social media to lament sharing that being a Nigerian is a curse home and abroad.

“Being a Nigerian is a curse home and abroad…I have to change that,” she wrote on her Instastories.
Read also: BBNaija Khloe Is All Shades Of Diva Cuteness In This Stunner Gown

Recall that a few weeks ago, the TV personality explained that poverty is the reason most ladies cannot undergo cosmetic surgery. She explained that women with big stomachs are not happy with themselves and would undergo surgery if they had the money. Khloe revealed that she made up her mind in less than two weeks to have surgery on her body and she got it done in less than two weeks.

One wife is explaining why NOT to wait until marriage to have sex for the first time after having a bad experience on her wedding night.

Laci, from the US, said that she was raised in a “purity culture” but explains why this ruined her sex life for years.

Taking to her TikTok account, the wife was replying to another man’s post which said: “I just want to say that waiting until marriage to have sex for the first time is a really bad idea.”

Posting under the domain @laci_bean, Laci said: “I could not agree with him more. Let’s get a little vulnerable.”

“I grew up in the 90s where purity culture was like ALL the rage. There was even a point where I was like ‘I’m not even gonna kiss until marriage.’ Well, my husband and I did ‘technically’ wait until marriage” she added.

Laci explained that she did have some sexual experience with her boyfriend but the pair did not have sex before their wedding night.

“We weren’t like 100% pure but you know what I mean. When I tell you that my wedding night was f*****g sucked, it is an understatement” said Lacy.

Adding: “On my honeymoon, I called my sister, who is a nurse, literally bawling on the phone, saying ‘I think my vagina is broken’.”

Another thing the woman grew up believing is that she should put her own sexual needs and desires aside, and just focus on pleasing her man.

“If you want to wait, thats’ fine. But it shouldn’t be because an institution pushed it on you” commented one person.

Another added: “My mom told me to go live with someone for a year before thinking about getting married. Best advice ever.”

“Nana told me to test drive the car before you buy it” commented a third.

Singer Davido misses his dear friend Obama DMW dearly and he is keeping him close to him for the rest of his life as he has inked a tattoo with the code of his late friend on his arm.

The hitmaker and Obama were quite close and he showed off the new ink on social media paying tribute to his friend. He also inked the inscription, ‘O fe rege’ beside the tattoo with flying birds. The tattoo has gathered mixed reactions on social media with many sending OBO love and strength to heal through the pain.

Recall that Obama passed away from heart failure on June 29th, 2021, at Ever-care hospital in Admiralty Way, Lagos, and the news of his death came as a rude shock to many in the entertainment industry.
Read also: Davido Takes His First Ride In His N240m Rolls Royce Cullinan (Video)

Anna and Lucy DeCinque, dubbed the world’s most identical twins have stated that they want to get pregnant together at the exact same period.

The popular identical twin sisters who share their lives in the American TLC network reality series, Extreme Sisters, are so close to the point that they do everything together.

According to Daily Mail, the Australian ladies eat, sleep, shower, go out together and try to keep their lives in sync.

The sisters who spend every minute together even have a shared partner of nine years with whom they are now trying to synchronise their pregnancy.

They have been monitoring their bodies and doing research so that they can both conceive at the same time for their 40-year-old partner, Ben Byrne.

“We learnt from the internet that when your temperature goes up your ovulating,” Lucy said in a recent YouTube video.

Asides from wanting to get pregnant at the same time, Anne and Lucy spent a whopping $250,000 (N102 million) on cosmetic treatment, breast implants as well as their eyebrows so that they’d look more alike, Times Now News reports.

Speaking on their fondness for each other, Anna said they have separation anxiety and fears they may not function effectively if one is without the other.

We’re never apart. I don’t think we’d function without each other. We have separation anxiety. We’re bound to each other,” she said.