Everyone is happy whenever two adults in love decides to seal their relationship by walking down the aisle.

But how would you react to a wedding between two incredibly young children? To find out, check out this list of the five youngest wedded couples in the world.

Yusef Hassan and Gharam Reda are from Egypt. Yusef is 12 years old and Gharam is 11 years old. The couple’s parents said that the boy and girl had been in love since they were born. 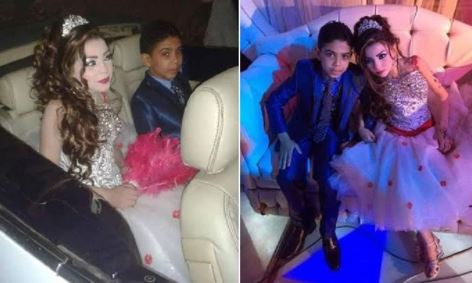 This engagement happened while Yusef and his families were celebrating their eldest son’s lavish wedding party. At that time, Yusef Nasser’s father decided to double the joy by announcing the engagement of his youngest son who was 12 years.

A beautiful nine-year-old girl from South Lake Texas got married to Jose Griggs, who was 7 years at the time. Her parents said it was her final wish before she died. Jayla Cooper was suffering from last stage leukemia and the doctors said that she only has a couple of weeks more to live. The little girl knows this and she asked her parents to do this one last thing for her. 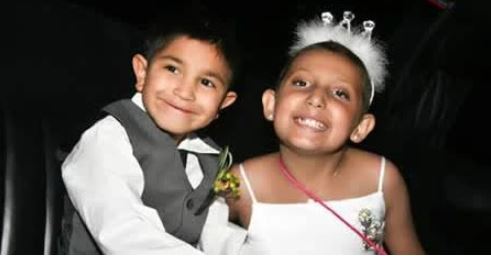 They agreed and organized a beautiful wedding for their daughter. She married her friend Jose Griggs whom she met in a medical hospital and he was also diagnosed with leukemia. This ceremony created a lot of buzz on the internet with some saying, “that what happened was a sin” while others expressed sympathy and compassion for the little girl.

Bonnie Buckland and Leslie Coneley are from Britain. Leslie Coneley may be too young to vote, drink alcohol or drive, but at 16 years, Leslie Coneley was old enough to wed his childhood sweetheart. This teen became Britain’s youngest groom after marrying just 18 days after his 16th birthday. On August 7th, Leslie married his long-term girlfriend Bonnie Buckland who was 17 at a lavish ceremony in Swindon Wiltshire.

Five-year-old Eileidh Paterson fulfilled her dying wish to be a bride when friends and family put on a heartwarming fairy tale ceremony for her and her best friend. Eileidh Paterson was diagnosed with neuroblastoma, a rare form of childhood cancer. Her last wish was to marry her best friend Horrison Grier who was six years old. 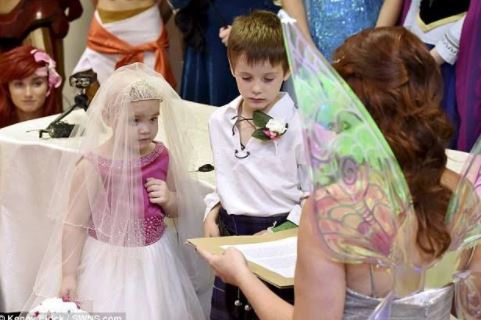 So her family set up a ceremony to marry her and her bestie Horrison Grier. her dream came true when the pair exchanged necklaces and were declared best friends forever in a ceremony attended by family, friends and a cast of costumed princesses and superheroes.

The photos of two teen dressed in wedding gowns and suits of what seemed to be a wedding scene triggered heated discussions on Chinese social media. The two teen were allegedly reported to be a 13-year-old groom and a 16-year-old bride. The couple both from southwest China’s Guanxi Juan autonomous region claimed to have known each other for over a year. Both allegedly dropped out of school. 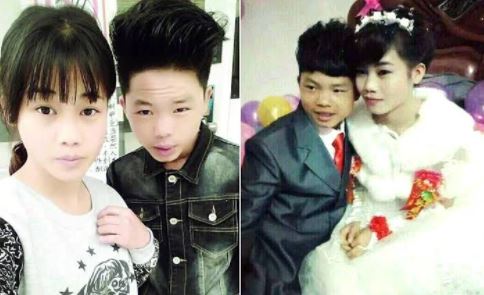 Aside from clarifying their ages in an online statement, the two also refuted netizens speculation that the marriage was due to the bride’s pregnancy. The 16-year-old bride said the marriage between them was just inevitable after knowing each other for over a year. “So we just hold the ceremony and we’ll get a marriage certificate after we reach our legal age,” she said.

7 tips to make your make up last longer

We all follow a skincare routine based on our skin type to keep our skin fresh and rejuvenated. Investing in a good toner, moisturizer and serum will go a long way in maintaining your skin.

Applying a face mask at bedtime and using a good face wash refreshes the skin and gives it a healthy glow. Makeup can further enhance your beauty, however, it doesn’t last long enough usually.

Do you wish to look prim and proper all day long? If you are wondering which techniques to employ to make your make-up last longer, this read has got you covered.

Listed below are a few simple hacks to prolong the effect of your makeup and keep it intact for you to look dazzling and flawless all day long.

Using a toner after rinsing and exfoliating your skin makes it glow and feel smoother. Apply moisturizer on your skin. Stay hydrated enough, so that your skin remains hydrated at any given time. Purchases a moisturizer based on your skin type and ensures it is oil-free. This helps to prepare your skin before applying makeup.

2. Prep your skin with primer

Primer is the first product you must apply before you get your hands on makeup. It is the secret to keeping your makeup intact and lasting throughout the day. It helps to lock in your moisturizer so that your BB cream or foundation does not get absorbed by your skin and fade away. A good quality primer evens out skin tone and blurs out any imperfections. It takes care of any pores and fine lines on your skin too. Applying primer is the topmost tip to keep in mind to achieve an everlasting makeup look. Ensure your primer is water-based and oil-free, so it keeps your foundation and BB cream intact. Eye primers create a smooth surface for blending eyeshadows and to prevent smudging.

3. Invest in a good foundation

Invest in a premium and lightweight oil-free foundation so it will not crease or give your skin a cakey look. This will stay in place all day long and be weightless on your skin. Pick a foundation as per your skin type and offers full coverage lasting for 24 hours. This gives your skin a smooth texture and makeup will last longer.

Choose waterproof eyeliner and mascara as these tend to smudge easily. Give this waterproof formula a try so that you do not regret the raccoon effect after a while. Avoid applying eye cream while using eyeliners and mascara.

Invest in a good compact or lightweight powder. On applying your liquid foundation, set it with a translucent powder, a compact or banana powder. Dab the powder lightly as this helps the foundation last longer and not make your skin look cakey. Pick your shade of concealer and set it gently with a little bit of powder.

The secret behind a long-lasting eyeshadow is to apply concealer as your base. This will ensure your eye makeup lasts all night long. It will make your eyeshadow pop up and give it an enchanting look and feel. So don’t forget to prime your eyelids with concealer before you set out with your smokey or neutral eyeshadow look.

7. Set it with a setting spray

After applying your make-up, don’t forget to set it with a makeup setting spray. A setting spray works as a final touch-up and helps your makeup stay in place. It makes the skin glow and prolongs the makeup wear time of your skin. Finish your look with a great setting spray.

Don’t forget to lock in your lipstick with a lip liner. Swiping on a long-lasting lipstick by adding a layer or two as per your choice helps your shade last longer.

These are a few tips and tricks to use that can help your makeup last longer. These simple hacks will make you glow all day long and your makeup will last longer no matter what the day has in store for you!

6 places on earth where the sun never sets!

Our routine revolves around 24 hours a day, with around 12 hours of sunlight, and the remaining hours are night time.

But, did you know that there are places across the world where the sun does not go down for more than 70 days?

Imagine how interesting it would be for tourists to keep a track of time, when even the locals there get confused with no sunset for straight 70 days.

If you are keen to know more, here are 6 places on Earth where the sun never sets.

5 signs you’re consuming too much carbohydrate

Foods that contain carbohydrate helps to build your body and also provide energy. When you consume them regularly, it tends to affect your body organs. It will increase your risk of having cardiovascular diseases.

There are some signs you will notice which indicates you are consuming too much carbohydrate.

Try and limit your carbohydrate intake when you notice these signs.

Below are the signs.

1.You will tend to struggle with acnes.

When you notice that you keep having recurrent acne, that means you are consuming too much carbohydrate. You will have to reduce your carbohydrate intake and go for more protein and fruits. This will help to reduce pimples break out and keep your skin healthy.

2.When you keep having constipation.

This is when you always feel like eating sweet foods. When you have been eating too much carbohydrate, your taste bud will be craving for sugary foods.

4. You will experience more build up of cavities.

When you start having many cavities, that tells you that your carbohydrate intake is high. Excessive consumption of carbohydrate can leave left overs in your teeth which could later be infested by bacteria.

When you consume carbohydrate regularly, you will tend to gain weight. When you observe weight gain, it means you need to cut down on your carbohydrate and go for more fruits.