Political Analyst, Demola Olarewaju on Wednesday said “the most important electoral factor in 2022 towards the 2023 Nigerian general election is the general census”.

According to Olarewaju, a top member of the Peoples Democratic Party (PDP) in Lagos State, “the numbers will again be skewed”.

He claimed that the game of population will decide the 2023 presidential election, as several state governors already have staff of the National Population Commission (NPC) “on their payroll”. 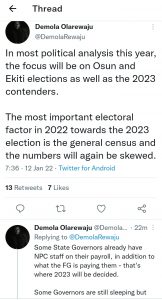 “In most political analysis this year, the focus will be on Osun and Ekiti elections as well as the 2023 contenders. The most important electoral factor in 2022 towards the 2023 election is the general census and the numbers will again be skewed,” Olarewaju said via Twitter.

“Some State Governors already have NPC staff on their payroll, in addition to what the FG is paying them – that’s where 2023 will be decided.

“Some Governors are still sleeping but will wake up to cry, only when it is too late.”

The Federal Road Safety Corps (FRSC) said some of its officers at the Mowe unit of the Ogun State Sector Command on Friday helped an expectant mother on transit to a safe childbirth.

A statement by Mr Bisi Kazeem, the Corps Public Education Officer (CPEO) on Saturday said that the assistance became imperative as it saved the lives of the mother and child.

According to him, while on patrol at Mowe, the team, led by Deputy Route Commander (DRC) Damilola Osiyemi of Mowe Unit Command assisted a woman who was in labour around 1430hours on Friday.

“The woman, Mrs Ola of No 7, Aiyegbami street in Sagamu, boarded a vehicle with Reg No: FKJ 904 HE from Sagamu.

“She was sighted in labour and she was later rushed to Broad Life Hospital, Olowotedo near NASFAT area, Mowe Ogun State by the team where she was later delivered of a baby girl,” the statement said.

It added that the command would not relent in its determination to do anything that would safeguard the lives and property of the residents of Ogun on the road and Nigeria at large.

The statement urged all motorists to desist from breaking traffic rules and regulations to reduce traffic congestion.

It also called on motorists to feel free to seek help from FRSC personnel operating on the highway whenever the need arises.

‘After I Tore My Card, I Ceased To Be A Member’, Obasanjo Tells PDP

Former President Olusegun Obasanjo told leaders of the opposition Peoples Democratic Party (PDP), has maintained he is no longer a member of the party from the day he tore his membership card.

Addressing a PDP delegation led by the National Chairman of the party, Iyorchia Ayu, four former governors, and members of the party’s National Working Committee visited him at his residence in Abeokuta, Ogun State on Saturday, he won’t stop dishing advice to anyone who approaches him in the interest of Nigeria

Addressing the PDP delegation, Obasanjo said: “I’m no longer in partisan politics and there is nothing that can bring back. Anybody who wants my advice, I will always be there in the best interest of Nigeria.

“Whatever I do in my own life…because I became president on the platform of PDP, PDP will continue to be part of my life. Since the day I tore my PDP card, that was the day I ceased to be a member of PDP. That day I vowed not to be a member of any political party.

“I will continue to be a statesman.”

The surgery, according to medical experts, could only be done either at the Babcock University Teaching Hospital or India. However, the family considering the financial constraints of obtaining a visa and other logistics, resorted to doing the surgery at Babcock university here in Nigeria.

The young boy according to a medical report signed by the management of Lagos State University Teaching Hospital (LASUTH), is currently on anti failure medication.

The report further implores Nigerians to accord him necessary assistance.

Ramadan was found to be centrally diagnosed with oxygen saturation values in room air between 77-45 per cent.

“Examination of the cardiovascular systems revealed a heart rate of 135bmp; with a prude 3/6 pansystolic murmur loudest at the left lower sternal border.”

The report revealed that echocardiography was done on January 6, 2021, and it revealed that Ramadan has three holes in the heart namely;  Secundum ASD, right partial anomalous pulmonary venous connection and moderate PAH.

It further states that he was presented on account of recurrent chest infections noticed from birth. Mrs Mayalleke Tolani,  Ramadan’s mother while pleading with Nigerians to come to her aid, explained how she has been facing endless difficulties since she gave birth to the boy. Last November, LASUTH told Tolani her son was due for the operation.