Uche Mefor, the former Deputy-Leader of the Indigenous People of Biafra (IPOB), has accused the proscribed group, led by now-detained Nnamdi Kanu, of being responsible for the mindless killings experienced in the southeast.

POLITICS NIGERIA reports that the leadership of IPOB has severally distanced the secessionist movement from the increasing violent activities of some blood-sucking monsters going on in the South-East under the name of ‘unknown gunmen’. But Mefor insists IPOB is behind the violence, destruction, and killings. He described the senseless killing of Igbo people by Igbos as an “abomination”. 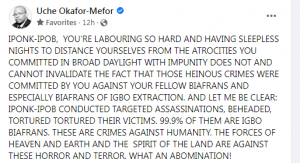 “IPOB, you’re labouring so hard and having sleepless nights to distance yourselves from the atrocities you committed in broad daylight with impunity does not and cannot invalidate the fact that those heinous crimes were committed by you against your fellow Biafrans and especially Biafrans of Igbo extraction. And let me be clear: IPOB conducted targeted assassinations, beheaded, tortured their victims,” Mefor wrote on his verified Facebook page recently.

“99.9% of them are Igbo Biafrans. These are crimes against humanity. The forces of heaven and earth and the spirit of the land are against these horror and terror. What an abomination!”

Who was Pearly Young? Buffalo Shooting Victim: 5 Facts You Need To Know

Do Bobbi and Melissa End Up Together in Conversations with Friends?