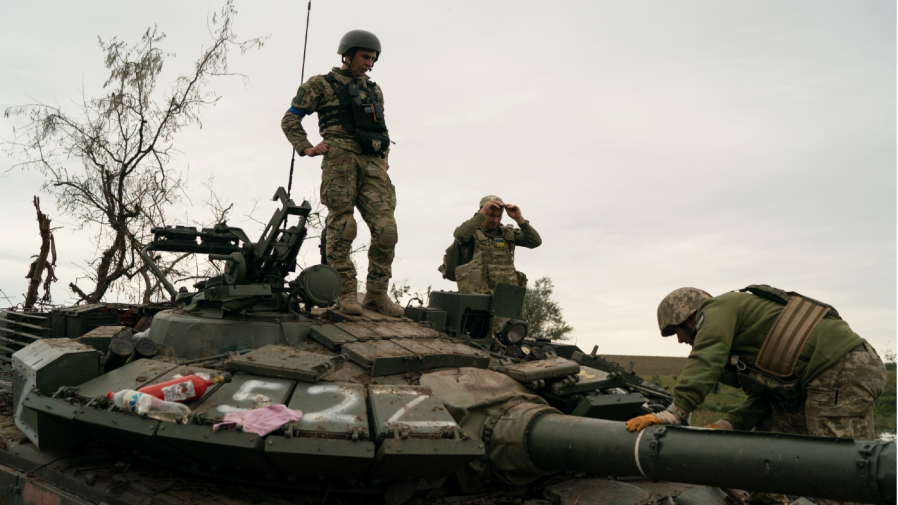 While the performance of Russia’s troops participating in Moscow’s invasion of Ukraine has thus far been almost universally poor, to say the least, the reputation of Russia’s security forces and intelligence services sustained a similar drubbing.

Although no public consequences appear to have been placed on the leadership of Russian intelligence and security agencies yet following the rout of Russian troops near Kharkiv, maintaining the goodwill they have historically enjoyed from Russian President Vladimir Putin is all that stands between them and being named a scapegoat for this month’s battlefield’s defeats.

On Sept. 6, Ukrainian President Volodymyr Zelensky announced that a large Ukrainian counteroffensive aimed at territories held by Russian forces in the eastern portion of Kharkiv Oblast had begun. For several days, Ukrainian troops quickly maneuvered deeper and deeper into Russian-controlled territory, reaching and liberating important nodes of Russia’s occupation and invasion, such as Izyum, Kupyansk and Balakliya. These settlements had been captured by Russia in the first weeks of the war, and their reclamation by Kyiv represented a significant blow to Russia’s so-called “special military operation.”

Despite the fact that Ukraine’s buildup of forces in the Kharkiv Oblast had possibly begun as much as a month before the actual start of its counteroffensive, Russia was caught flat-footed by Ukraine’s spearhead. Whether led by genuine ignorance of Ukraine’s growing buildup or top-level strategic decisions to ignore blinking warning lights that something was afoot near Kharkiv, Russian military leaders decided to reposition thousands of troops from eastern Ukraine to Kherson Oblast to defend against a Ukrainian counteroffensive. Even before its operational failure near Kharkiv, Russian intelligence services have proven to be deeply rooted in antiquated understandings of the field’s tradecraft in the information age, particularly as it relates to open-source intelligence.

The mixture of irregular formations assembled from Russia and its Luhansk People’s Republic (LNR) and Donetsk People’s Republic (DNR) separatist statelets, joined by units of Rosgvardia, which were left to hold Russia’s northernmost flank in the absence of the regular forces which were dispatched to Kherson, was clearly not up to defend against the concentrated forces which broke through Russia’s lines at a rate which exceeded some Western expectations.

The difference between Russia and Ukraine’s utilization of intelligence in support of their operations could not be starker. While Kyiv has had the advantage of being able to interface with U.S.-supplied intelligence to plan its operations and pull off acts of strategic deception, Moscow’s forces seem to either be unable or unwilling to take heed of its own intelligence resources, which might have suggested the imminence of a Ukrainian breakthrough near Kharkiv. Despite the establishment of what was reportedly a well-placed and broad network of spies and collaborators around Ukraine by Russian intelligence in the lead-up to its invasion, Russia’s intelligence services notably failed to deliver Russian President Vladimir Putin an accurate readout of Ukraine’s will to resist. This failure was compounded by the original contours of Russia’s “special military operation,” which envisioned a quick decapitation of the Ukrainian government with minimal resistance.

While rumors swirled that Federal Security Service (FSB) officials responsible for analysis of Ukraine were arrested in the opening days of the war as the invasion’s lack of success became apparent, a full-scale campaign to punish leading figures in Russia’s intelligence apparatus has never picked up steam. Sergei Beseda, the head of the FSB’s 5th Service, which is responsible for operations in Ukraine, was reportedly released from house arrest shortly after his original detention, and the FSB as well as other agencies, such as Russia’s military intelligence agency (GRU), have increasingly leaned into supporting the invasion.

While it can be tempting for outside observers to view Russia’s government structure as a clean power vertically running from President Putin on down the chain, power in Russia is much more distributed among factions than they like to make public. Such splits had already come to the fore within weeks of the invasion’s kickoff, pitting business, political and military leaders against each other. Influence in the Kremlin is also dependent on personal qualities and access. Official and unofficial connections to the halls of power in the Kremlin have historically afforded Russia’s intelligence agencies significant influence over Russian state decision-making, a shield of favor that will undoubtedly be under heavy stress in the near-term future.

Much of Moscow’s discussion on who is to blame for the collapse of Russia’s lines around Kharkiv will likely continue to take place behind closed doors. However, Russian military bloggers and commentators have already kicked off a furious debate on the subject, indicating the demand for a culprit to be named. While the sacking of at least six leading Russian generals by August since the start of the invasion (as claimed by the British Ministry of Defense) gives a clue of what punishment the Kremlin can mete out, the chances that Russian intelligence and security agencies will be able to avoid punishment ultimately rests on how much goodwill they still enjoy in the Kremlin.

As world leaders gather for climate week, they are running out of time

Alaska Republicans should ‘rank the red’ to win in November

In the past, Russia’s security and intelligence agencies have been known to withstand blowbacks for sloppy operations, such as in the case of the 2018 poisoning of Sergei and Yulia Skripal. Nonetheless, the coming days and weeks will prove to be a significant test as to whether Russia’s intelligence and security agencies can avoid attracting blame for their failure to envision or communicate the prospect of a Ukrainian breakthrough near Kharkiv.

While they have historically enjoyed the support of a president who is a former intelligence man himself, the breakdown of Russian intelligence agencies’ ability to be the eyes and ears of Moscow’s invasion force could attract blame from those inside and outside the Kremlin.

Wesley Culp is a research fellow at the Center for the Study of the Presidency and Congress focused on Russia and Eurasia. He can be found on Twitter @WesleyJCulp.

Christian Garland’s Reason To Quit His Role on SVU Explained, Where Is Demore Barnes At This Time?

Meaning of lineman, linewives and bucket bunnies on TikTok as drama goes viral